Automotive ownership is like a key to freedom. It opens up an entirely new landscape the way your first bike did when you were a kid. As we get older there comes a point for many of us though when a car does more than just get us from A to B. It says something about who we are, and like the clothing we wear, we all want to express ourselves in our choice of automotive conveyance. That’s the subject of our POMCAR comparison today. When the time comes to pick out a daily driver that says something about the owner, what’s the best option between the Audi A3, the Subaru WRX, and the Volkswagen GTI? Let’s find out.

Why did we choose these three cars to compare as opposed to others? First and foremost, the average spend on a new car in America is roughly $37,000. We wanted to find cars that could be had for that or less that weren’t just bare-bones base models. We’re adding many options for each but will discuss configurations. Also, these three are often cross-shopped since they offer similar attributes, technology, and have a following in the automotive community.

For decades the GTI has been the go-to option for anyone who wanted a punchy hatchback with practicality and refinement. While the Subaru WRX can’t ever really be called refined it is very powerful and practical. What’s more, is that it’s grown up and matured considerably since its days of being the daydream of every bro with a vape pen. Finally, the most recent entry into our trio of this type, the Audi A3, is the perfect car to bridge the gap between the front-wheel-drive GTI and the all-wheel-drive WRX. 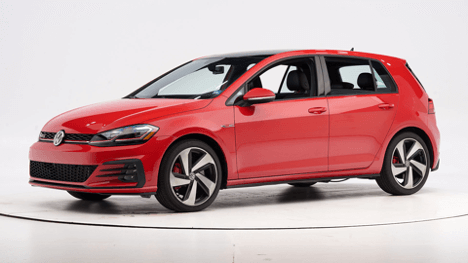 It’s a travesty some of you will say. How could the Golf possibly lose out to either of these other two much less both? It’s cheaper than the Audi and has the same exact drivetrain. Truthfully, the GTI is a joy to drive around town. It’s a proper tribute to its ancestors and can still be had with those lovely plaid seats that are so iconic. The interior feels great too. Volkswagen has learned so much from its partnership with Audi but perhaps the most beneficial has been how to do an interior right.

It’s also got the most utility of this group and honestly, if that’s all this test was about, the Golf would win hands down. Neither the Audi nor the Subaru would even come close. If you can just barely afford to shell out the $28,000 for the Volkswagen then it might be the best tool, but of course, that’s not all this test is about.

The GTI simply doesn’t offer enough for the money once options start to come into the equation. While the interior is good it’s not as nice as the Audi, and while it’s more refined than the Subaru it’s considerably less powerful and lacks the sure-footedness of all-wheel-drive even if you buy the top-of-the-line Autobahn edition. 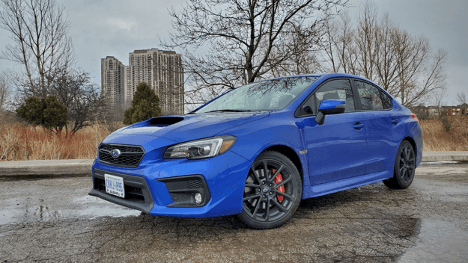 As a WRX owner, I can tell you that it’s a fantastic car. It’s fun, it’s reliable, and it’s got a ton of attitude. The problem is that very few drivers want the in your face attitude it’s known for. For $37,000 you can actually opt all the way up to the STI model, a raucous 305 horsepower rally-bred shuttle. That’s pretty impressive and destroys both the other two cars in terms of performance even when you spend to the same extent for each of them. The WRX also provides the best rear-seat headroom, the most power even in its base form at just $27,000, and it’s got something special neither of the other two does. Full-time symmetrical all-wheel-drive.

No matter how you view the Quattro system available in the A3 it’s simply not as good at keeping a car moving through snow, ice, or rain as the method Subaru has employed in the WRX. That system also provides the most sporty feeling behind the wheel and the most dynamic driving characteristics on the road of these three. The view from behind the wheel of the WRX is spacious and comfortable, far less cramped than the A3. If your goal is sportiness and you don’t mind the brash attitude then yes, the Subaru is the best car but it comes at a price. That price is a complete lack of interior comfort, ride comfort, and refinement within.

The seats are comfortable but a bit tight for anyone who doesn’t run 5ks or ride a bicycle 20 miles on the regular (the one caveat is that if you’re going to transport full-sized humans in the back seat, there is more space there for them in the WRX than the Audi). The shocks and struts seem to be playing a game of craps at all times, and the fit and finish simply can’t touch the tight tolerances and high-quality materials used in the Audi. That’s where the Subaru starts to fall short for a person’s first nice daily driver. It’s a bit of a blunt instrument and that becomes even more clear when you get behind the wheel of the A3. 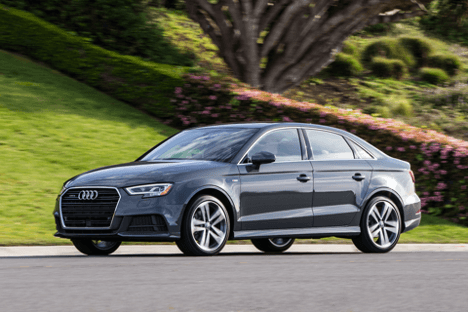 Balance is key in life and if the pandemic has taught us anything, it’s that. The A3 is the perfect balance between the other two in so many ways. First and foremost it’s the most flexible of the platforms. Live somewhere snowy, or want the sporty feeling of all-wheel-drive? The A3 can be had with Quattro just under our budget at $36,500.

If you don’t care about that you can have the front-wheel-drive model for $33,000 and get a serious bump up in terms of interior quality and brand recognition over the Volkswagen. At that level, you’re getting all the exact same running gear and performance (if not more thanks to a slightly lower center of gravity) as the VW and upgrading the quality, fit, and finish everywhere else. And there’s simply no comparison between the Audi and Subaru when it comes to interior quality. The Audi is in a different world.

That’s important because the A3 makes you feel something that you don’t in the other two, special. It feels more expensive than it really is and that matters when you’re going to spend the money on one of these. The weight of the steering wheel for instance is heavier than both the other two and the tactile feel of the buttons, switches, and knobs inside speak to the material quality only found in the Audi.

The A3 also has a slew of safety features that both the VW and Subaru are lacking. Combine that with the outstanding flexibility of the platform, the classically elegant styling, and the brand presence that Audi holds today as one of the “Big Three” from Germany and it should be easy to see why it’s our winner in this trio of daily drivers.

If you’re one of the lucky owners who’ve picked up any of these three in the last year keep in mind that despite the rankings there’s really no loser here. All three cars are exceptional vehicles that could’ve won overall if the focus was a bit more niche-focused. The Subaru is the sporty driver’s choice, and the GTI is the quirky and utilitarian winner.

If you’re in the market we’d strongly suggest looking for a used vehicle and be open to sourcing from across the US. POMCAR is the ideal pre-purchase inspection service for those discerning customers who have narrowed down a specific make and model and want a comparison of each before they buy, or need to compare and contrast close variations as discussed here. example. Regardless of which type of buyer you are, you will always benefit from an unbiased POMCAR inspection performed by an experienced tech. Our experts can ensure that the car you’re about to spend thousands on is in the condition that you think it is or save you from buying a vehicle with hidden costs.

Extended Car Warranty Pitfalls: Why You May Want to Say No
Rust. The good, the bad, and the ugly