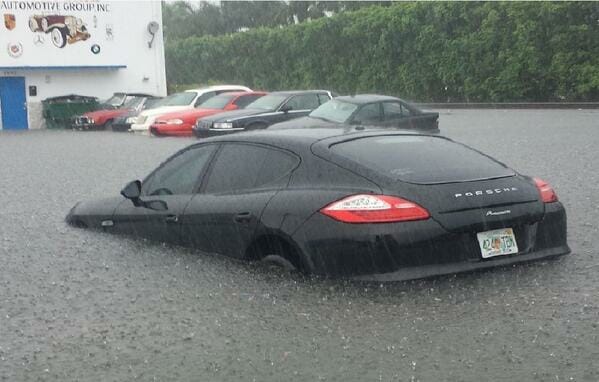 Does the phrase branded title scare you? If not, it should. Branded title cars have suffered some type of extreme damage, such as a major accident or flooding. To get the vehicle back on the road, a repair shop – that may or may not have known what they were doing – pieced the car back together.

Branded title cars and other jalopies

Branded title cars are, at best, a gamble. And they’re something you’ll want to avoid if you want reliable transportation that won’t bury you in repair bills.

By law, branded title cars are required to have paperwork disclosing previous damage. For example, cars that have been in a major accident get a salvage title, while flood-damaged cars receive a water-damage title.

But unscrupulous individuals have a way around this law – and it’s called title washing. Crooks use the scheme to remove pertinent information, such as damage disclosures, from titles.

There are also situations where severely damaged cars never receive a branded title in the first place. Instead, the vehicles slip through the cracks, then get repaired, before being labeled.

In other instances, a vehicle may get hit hard – but not hard enough to be deemed a “total loss” by an insurance company. Insurance companies usually opt to junk a car when damage exceeds 75 to 90 percent of the vehicle’s market value [2]. If the cost of repair falls short of that figure, the car may get patched up and put back on the road.

Wrecks masquerading as pristine rides are a major problem. Pomcar technicians, who are adept at spotting these cars, are your first line of defense. Here’s what our experts look for when inspecting a used vehicle.

1. Price too good to be true

If the price of a used car seems too good to be true – it probably is. Vehicles that have been compromised almost always cost thousands less than their clean counterparts.

Misaligned body panels indicate previous collision damage. You’ll want to look for large gaps and ill-fitting body parts. Also, it often helps to look at the body panels on one side of the vehicle, then the other, for comparison.

Excessive rust, or rust in odd places, may indicate a flood-damaged vehicle. A little rust is normal, but if a car that’s just a couple years old looks like it’s ready for the junkyard, well, it probably is. Rust in weird places, such as under the dash, is a bad sign as well.

Major under hood components, such as the engine and transmission, may have excessive corrosion on a flood-damaged vehicle. The parts often look as if they came out of a junkyard, despite being just a few years old.

Even when flood-damaged vehicles are “repaired”, they have lingering problems. So you’ll want to inspect the engine compartment, as well as the interior, for water stains and loose sand that often indicate water intrusion.

It’s also a good idea to peel back the carpet under the dash to check for moisture. And look for moisture in the lighting assemblies (headlights, taillights, etc.).

Inspect fluids for water contamination. Usually, oils that are mixed with water have a milky appearance. Water droplets may be suspended in the fluid as well.

Nuts and bolts don’t fall off on their own. If body fasteners are missing, there’s a good chance they were left out during collision repair. Check for missing fasteners on the hood, fenders, grille, etc. The radiator fan shroud and fan assembly should be secure as well.

Also, you’ll want to look for previously-loosened body fasteners. If a nut or bolt has been tampered with, its head will be slightly rounded from being turned by a wrench or socket.

Missing data decals – such as the VIN, tire placard and emissions sticker – indicate the car has been in an accident then repainted.

A damaged car is cobbled back together with replacement parts. Look for body panels that wear stickers from an aftermarket parts manufacturer, as well as mechanical bits wearing junkyard markings.

Paint issues can reveal a car’s checkered past. Overspray and other visible signs of repair, such as orange peel and fish eyes (tiny craters in the paint), indicate the car has been in an accident.

But some body shops are good – really good – at their craft. So, a paint depth thickness gauge is often used to check whether panels have more paint than they should. The average factory paint job on a car should be about 4-5 mils thick [1]. Paint (and possibly body filler) that’s thicker than that points to previous collision repair.

Cars that have been crunched in an accident, or submerged in a flood, often develop a myriad of electrical issues. Multiple electrical components may not work and warning lights often cover the dash. An OBD port that’s been damaged or tampered with is a bad sign as well.

Although CarFax and similar report services aren’t always 100% accurate, they can be helpful. Run the report and look for accidents, as well as other red flags, such as dozens of owners or and inconsistent history. Vehicles that have been wrecked will often be low mileage, too, because they’ve had a lot of downtime for repairs.

POMCAR is a nationwide provider of used vehicle pre purchase inspections. PPIs are all we do. We have an extensive network of qualified technicians ready to perform a 270-point inspection and deliver a meaningful report. Check us out at www.pomcar.com

Automotive extended warranties: peace of mind or waste of money
Buying a Used Car Online?  Get it Inspected Once Delivered to Avoid Unexpected Costs!