One universal fear shared among car used car buyers is rust. Brown, discolored, rough, sometimes found in groups, sometimes alone, on the exterior surface or that soft underbelly. You should know that rust is found almost universally across every used vehicle regardless of year, make, or model. While some people can accept surface rust, most can’t tolerate rust that has compromised the structural safety of a vehicle. The dilemma is that most people can’t tell the difference between rust that is completely superficial versus the rust that has eaten away at critical safety components. Not all rust is equal and a POMCAR pre-purchase inspection can ensure you make a well-informed decision. But first let’s dig into the varying degrees of rust.

So What Exactly Is Rust?

Rust develops naturally when metals that contain iron are exposed to water and air. How quickly a particular part of a vehicle rusts is dependent on many factors including time, the concentration of water, air, and chemicals such as salt. While water on its own is a major contributor to the chemical reaction causing rust, saltwater accelerates the reaction. It can happen quickly too. Vehicles in sunny coastal beach towns or those in northern areas where roads are treated with salt and chemicals will experience more rust to exterior components such as shocks, struts, rotors, axles, and wheel wells.

Rust on brake rotors is common. That rust is knocked off quickly and the brakes return to their shiny appearance as soon as the wheels spin during the next spirited drive. It’s that quick, frequent action that keeps the rust from building up, and ultimately eating into the rotor itself which can cause structural damage. Today we’re going to take a deeper look at rust in all its forms and get a better understanding of when rust poses a serious risk, and when it’s light enough that it shouldn’t cause worry or concern. After all, nobody wants to dismiss a vehicle because they misdiagnosed rust as much worse than it actually was. You can’t always judge a book by its cover!

The truth is that almost all cars have some rust. Despite what many so-called experts will say, rust isn’t an automatic death sentence for a car. In fact, the vast majority of rust on cars is considered to be what mechanics call “surface rust”. That’s exactly what it sounds like by the way, rust that’s only beginning to develop on untreated, uncovered, bare metals that are almost always underneath the car.

The vast majority of the time, the rust simply appears as a reddish coloring or spots on the part itself without any flaking, pitting, or chipping of the metal. Sometimes even some minor flaking or pitting can be negligible if it hasn’t affected the integrity of the part in question. Nevertheless, most times this type of rust is found, the metal itself is intact.

Surface rust is not structurally significant in any way and might not even need to be addressed. For example, should you be buying a vehicle from an area where the rust developed (say, the northeast) and you’re moving it to a part of the country where it’s much dryer (like the southwest), surface rust can be expected to never progress any further. What’s also good about surface rust is that it’s not hard to repair. A solid detail job will remove the rust or you can just grab a clay bar with some spray lubricant to remove that oxidation yourself. 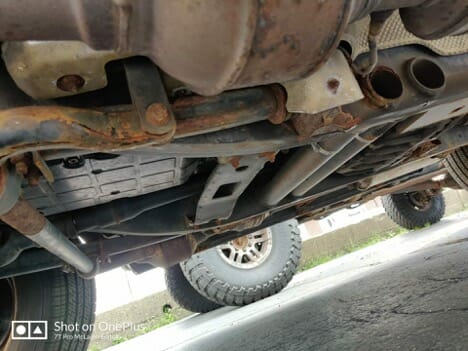 Sometimes though rust is more than surface deep and it’s here where repairs become required as opposed to just desired. It’s vital though to consider where this rust is and how it’s affecting the vehicle in question. The location of rust can completely change the value proposition a buyer is presented with.

Take for example a vehicle that has a fairly clean undercarriage without any major rust but does show signs of body cancer, another name for rust that is rotting through body panels on the vehicle itself. These spots aren’t structurally vital to the vehicle and don’t pose a safety risk, but at the same time, they’re not inexpensive to repair. Body panels that have rusted through need to be replaced. If this rust is found on a door, simply replacing the door can be the cheapest solution but when found on an immovable body panel, the affected part will need to be cut out completely, replaced with new metal, and then painted.

What’s even worse is when the rust has affected major components of the vehicle in question. It’s not uncommon to see shocks, struts, springs, engine mounts, and other vital parts heavily pitted or even rust rotted all the way through. Sometimes though the rust damage happens much more quickly to these removable and replaceable components than it does to the structural frame and body of the car. That gives buyers the opportunity to replace the parts in question before significant irreparable damage is done, thus restoring the car to a healthy road-going condition.

For example, take this Mercedes G-Wagon that was listed for $30,000 below market value. Why? Because most people would run away rather than take the time and effort to replace critical suspension components and some exterior panels. However, the savvy customer looking for value, who is willing to take the time and effort to bring the Jeep to a qualified mechanic and body shop, will reap the rewards of a solid POMCAR PPI.

Finally, the worst of rust sees it chew through the structural parts of the vehicle in a way that ultimately will require far more costly repairs than most cars are worth. Vehicles can rust through the floorboards too, rendering them unable to support passengers’ weight safely. Oftentimes, vehicles in this condition are only fit to be salvaged for parts rather than restored to roadworthy status. That’s because while rust on the outer surface might be removable, the damage has occurred far deeper, and weakened the structure to the point that it could fail to support its own weight.

The timing and severity of structural failure is unpredictable as well which means that drivers could be on the road when the metal gives out causing injury or even death. It’s because of that unpredictable nature of deep rust damage that so many are wary of buying a car with heavy rust. Nevertheless, as you can see, determining the extent of the damage isn’t a case of “any rust is too much”.

While shopping for vehicles keep in mind that all cars, trucks, and SUVs sold in America today are required to resist corrosion and significant rust issues for many years after initial production so lightly used vehicles are unlikely to have major rust issues regardless of where they’re driven.

POMCAR techs leverage years of experience working and living in the geographic areas where they inspect and can provide you with a solid assessment of the degree of rust damage, if any. Rust can be an insidious problem for any vehicle but taking into consideration the make, model, location (it’s history and where it will be driven in the future), and the costs associated with immediate repairs and restoration (e.g., removal of superficial rust or a clear understanding of needed repairs and costs), or significant concerns to critical components can help you find that value car or save you from a bad case of buyer’s remorse!

Audi A3 vs. Subaru WRX vs. Volkswagen GTI
The Dream Of Buying A Car Online Turns Into A Nightmare